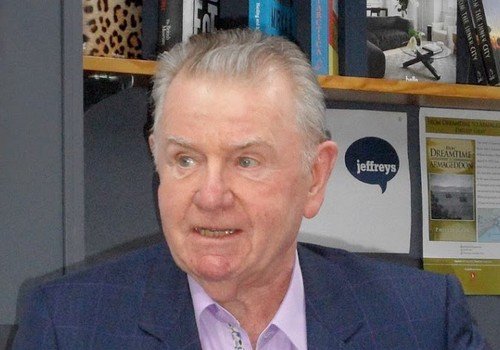 Born in 1938, Des Tobin says he’s crammed more lives into his 82 years “than your average cat.” He has variously been a failed student, a springboard diver, a discontented apprentice panel beater, a junior pole-vaulter, a VFL and Olympic Australian Rules footballer, a YCW extension worker in Queensland, a ten pin bowling instructor, a successful business executive within the funeral industry, a golfing tragic, a university lecturer and a published author.

Des joined the Malvern Branch of the YCW in 1954 while still a 15-year-old schoolboy at St Joseph’s Technical College Abbottsford. His older brother Barry – who at the time was assistant Melbourne YCW diocesan secretary to Dan Callahan and was later ordained to the priesthood – was Captain of the Malvern YCW under 18-football team and recruited Des as a player. After leaving Abbotsford at the end of 1954 Des joined the branch leaders group.

Terminating his apprenticeship indentures in 1957 and completing National Service Training, Des worked at the YCW Co-operatives before “volunteering” to work for the National YCW at the beginning of 1959. He was assigned to Queensland and has described his two years as a YCW extension worker as a “life changing experience.” The work took him throughout the vast state of Queensland where he helped establish new YCW branches in every Queensland diocese other than Cairns where the then Bishop refused to welcome the YCW.

The responsibility of the position and living away from home brought him a new maturity and as Des was to say “those years helped me become a person in my own right.”

“I was lucky enough to be a premiership player with the Coorporoo Football Club in the QANFL in 1960 but best of all I was to meet my future wife Margaret Cleary (a member of the Brisbane NCGM executive) to whom I have been married for 58 years,” he said. “We have been blessed with a good marriage, four loving, independent children and eleven beautiful grandchildren.”

Des joined the Tobin Brothers funeral business in 1961. He ultimately became the company CEO in 1982 and remained in that position until his retirement in 1998.

He then turned his hand to writing and since 2003 he has written and published six biographical works.

His most recent work Just a Man Called Phonse – the biography of his late father A.V. (Phonse) Tobin – was published in October 2018..

The life of Phonse Tobin was anything but ordinary. Born in 1905, he followed on behind soldiers as they marched to the wharves to depart for World War I. He earned pocket money by trapping rats and collecting the South Melbourne Council’s rat bounty, and almost ‘haunted’ the Collins Street movie and live theatres.

After leaving school in 1919 he worked as a storeman, salesman, soldier and fireman. In 1934 Phonse and three of his brothers started what has become Australia’s most successful family-owned funeral service company – Tobin Brothers Funerals.

A natural entertainer, Phonse possessed a fine singing voice and produced many amateur theatrical productions in the 1930s. He was a good all-round sportsman and a successful professional footrunner. He was a long-serving member of the North Melbourne Football Club committee and was the club’s president from 1955 to 1957. He was a life member of both the NMFC and the VFL (now AFL).

Phonse was one of those rare characters who could meet, communicate and be at ease with people of all classes and walks of life – from prize fighters to prime ministers, from “mug” punters to wealthy publicans or bookmakers, from Knights of the Southern Cross to knights of the realm, from everyday parish priests to ‘princes’ of the church, and from grave diggers to governors.

Like everyone else, he had his failings. But these failings – such as they were – were more than offset by his strength of character, generous spirit, creative flair, kindness to people in need, and his love for and undying support of his family.

To obtain a copy of Just a Man Called Phonse (or other books by Des Tobin), visit Des’s website destobin.com.au, call him on 0417 510 211 or email destobin@killaghy.com