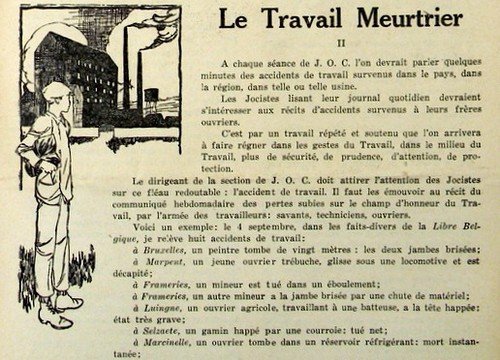 "May the soul of every worker who died on labour's battlefield rest in peace!" reads the YCW Prayer.

Nor was it an exaggeration to speak of "labour's battlefield" as a September 1926 article in  the YCW newspaper, La Jeunesse Ouvrière makes clear.

Entitled "Le Travail Meurtrier" or "Murderous Work," the article, probably written by Fernand Tonnet, cites a recent edition of a Belgian newspaper in which he noted eight work accidents:

• at Marpent, a young worker stumbled and slipped under a locomotive and was beheaded;

• at Frameries, a miner was killed in a landslide;

• at Frameries, another miner suffered a broken leg from falling equipment;

• at Luingne, an agricultural worker, working on a thresher, had his head caught leaving him in a very serious condition;

• at Selzaete, a kid became caught in a strap and was killed;

• at Marcinelle, a worker fell into a cooling tank causing instantanous death;

• at Tournai, a brewery worker was seriously burned by boiling beer.

In the face of such problems, it is no surprise that Tonnet went on to recommend that "at each YCW meeting, we need to spend a few minutes talking about industrial accidents."

"YCW leaders reading their daily newspaper should take an interest in the stories of accidents that have occurred to their working brothers and sisters," he wrote

"It will only be by repeated and sustained effort that we will manage to improve security, care attention and protection in work practices and the working environment.

"Each YCW leader needs to draw the attention of other leaders to the frightening scourge of the workplace accident. Each one must feel moved by the stories in the weekly press release of the losses suffered on the labour field of honour of by the army of workers, including scientists, technicians and blue collar workers," he concluded.

Lest we think that such problems are from the past or still only exist in developing countries, e.g. the Rana Plaza disaster, Safe Work Australia reminds us that 63 workers have already died in industrial accidents in Australia so far this year (as of 23 April).

Clearly, labour remains a battlefield for many.