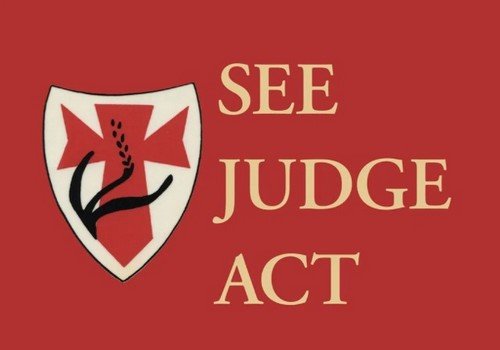 "It is more than just a history; it is an analysis of the foundational principles behind the 'See, Judge, Act' theology, combining Catholic social teaching with leadership training In order to reform society. It traces the development and growth of the groups and their later decline and eventual closure. Rod himself was a leader In the movement, but Jocelyn Franklin, who had years as a full-time leader and had surveyed members about their experiences, was the Inspiration and instigator of the book. Jocelyn sadly died the day the book was released.

"Belgian priest Joseph Cardijn developed the movement to prepare young leaders to be the yeast in the dough of society struggling in the disturbed social conditions of the Depression and two world wars. The author traces the history from the beginnings in Dunedin in 1937, followed by groups in Auckland, Christchurch and Wellington. The study programs and the numbers and, In many cases, names of young people involved are examined. Prior to Vatican II, when there was very little lay involvement in the Church, these groups expanded and blossomed

"In the 1950s and 1960s. Chapter 6 looks at the influence of Vatican II on the movement and Chapter 7 covers the more radical positions the movement began to take, followed by a proliferation of other groups people could join. Chapter 8 looks at the decline of the movement, and the last chapter asks "what now" under Pope Francis?

"Rod has meticulously researched every group, published as many photographs as he could find and name, and gives an interesting take on the support or otherwise of the hierarchy. Many of our leaders today, (or yesterday!), Jim Anderton, Ivan Snook,, Paul and Shirley Temm, Alf Kirk, Ian Shirley, Cardinal Tom Williams, and Manuka Henare were products of this Catholic Action movement.

"Rod asks at the end, what are we doing today which enables our lay people to use their lived experience as a catalyst for being missionary in today’s world? In a 'Fit for Mission' scenario, it Is a very pertinent question. A book to reminisce through, but to be challenged by," Lythe concludes.

"What a labour of love this book is!" Consedine begins.

"For more than 10 years, Rod Orange researched, wrote and has finally produced an amazing history of not just one Church lay organisation, but four-the Catholic Youth Movement (CYM), Young Christian Workers (YCW), Young Christian Students (YCS) and the Christian Family Movement (CFM). These movements thrived in New Zealand during the 1960s and 1970s and gradually died out in the 1980s.

"At their peak, they helped form several thousand lay Catholics nationwide about Christian life and how to live it in today’s world. Their formula was simple - to follow the mantra of the prophetic Belgian priest/founder Joseph Cardijn: See, Judge, Act. Nourished by their regular weekly meetings, these folk went into their workplaces, homes and wider communities to bear witness to the message of Christ as found in the gospels and in Catholic teaching.

"Rod Orange explores in much detail the modus operandi of the movements, interviews many key leaders and draws on written archival material. Ultimately he asks and attempts to answer the difficult question-why did they flourish so successfully for so long and then wither and die within a short few years? He looks at the key role bishops and chaplains played, the secular social movements that arose during the latter period, the upheaval in the Church after Vatican II, and the influence changing social mores and values had on Church lay movements.

"He has produced a very readable popular history, filled with facts and insights. Illustrated with more than 100 photographs, many of them along with a lucid text provide historic insights into the youth of previous generations and their involvement with the Church.

See, Judge, Act largely succeeds in its aims to provide an eyewitness account of the lay movements of the era, 1937-83. That he opens up many questions which need far more in-depth reflection is clear and answers are not immediate. Historians in the future will hopefully seek resolution to such questions and will find this book a great aid in their further research.