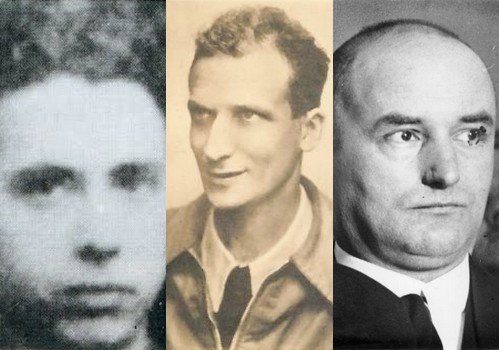 World War II in Europe ended 75 years ago in May 1945. Right to the end, however, JOC and JEC leaders continued to die in Nazi concentration camps.

The 23-year-old French YCW leader, Marcel Carrier, who had been sent to Germany as forced labour, was one of the last, dying at the Flossenburg concentration on 6 May 1945 - just two days before the end of fighting.

Married at eighteen, he was survived by his wife and three young daughters.

The French priest, René Giraudet, whose youthful ambition to become a missionary, had been thwarted by ill health, had volunteered to go to Germany to work as a clandestine chaplain to the workers who had been sent there.

Like Marcel Carrier, he was arrested for his work with the Catholic Action groups that had been organised among the French workers.

He was imprisoned in the Bergen-Belsen concentration camp until its liberation by American troops on 15 April 1945. Already weakened by typhus, he was evacuated by plane to Paris where he died in hospital on 12 June.

However, Catholic Action martyrs were not restricted to the Allied side.

After the war, he became a public servant, serving in various ministries, heading the Police Division of the Ministry of the Interior from 1924.

In 1928, he became head of German Catholic Action and took a strong stand against the nazification of Germany during the 1930s.

On 24 June 1934, he openly criticised the growing violence of Hitler’s government in a speech to the Catholic Congress.

Six days later during the Night of the Long Knives on 30 June 1934, he was assassinated on the orders of Reinhard Heydrich.

Klausener was supported in his opposition to Hitler by Bishop August Von Galen. However, most German bishops failed to oppose the Nazi regime.